Taking the Sketchbook on a Walk

I went out for a walk with my sketchbook this time. I found it incredibly difficult to sketch and keep my dog from pulling on his leash. Apparently, I take too long… although to be fair, if I stopped walking for 3 seconds, that’s too long for the pooch. It would be nice to have some way to have the leash attached to my waist while I sketched so every little tug doesn’t send my pencil across the page. I understand why birders wear the big cargo vest now.

I’m unsure what the solution is for the pooch leash problem. I was thinking of trying to get some sort of fanny pack and attaching a leash to it. Unfortunately, fanny packs are possibly the least stylish thing you can wear, so I was thinking about getting a running belt instead so it’s slightly less ugly.

Anyhoo, back to sketching. Since the majority of the birds out today were crows, after I was done filling in the color, it page was way too boring. Shades of gray don’t really inspire much, so I decided to add some color in the background. I sketched some light blue around one crow, but once I wet the color streaks appeared and the color ended up being too intense and distracted from the dark crow. After playing around, I found the best solution was to rub the water brush tip on the pencil itself so I only got a little bit of ink onto the tip. This way, the ink color is less intense because it’s more diluted with water.

In the images below, you can see how the background is less distracting because it’s not so saturated. It also fades out better because it allows for better gradients. I added a little around the bird and then used more water around that color so the fade is gradual. I also used this same technique, going back to add a little more color to the actual birds themselves. It allowed for better shades of gray since any of the pencils that have white in them don’t really blend well. I could pull color from the black pencil instead of using the various gray pencils since they are hard to work with. Awesome. Hope this technique helps you out too.

Pulling a small bit of blue off the watercolor pencil 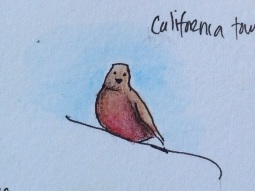 After posting this, I saw on the Audubon Society’s facebook page had a TED talk about crows and after doing minimal research, I found that there is not just one, but two talks on crows. They are very entertaining and have changed my views on crows, so I thought that I would share.

One thought on “Sketching Crows and Making Them More Colorful”