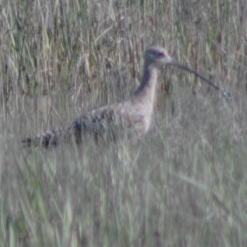 I was hankering to get out of the house on Sunday, so my parents and I went to Batiquitos Lagoon. I went birding there previously with my dad for Father’s Day, but my mom hadn’t come with us so she was busting a gut to go. I believe that I’ve infected my parents with the bird bug.

I didn’t sketch while I was there since I wanted to take the opportunity to actually observe the birds and spend the time learning to identify birds that I didn’t know. I was excited to see a couple of Whimbrels because there was a recent article about them in Bird Watcher’s Digest. I also enjoyed watching a female Nuttall’s Woodpecker flit around pecking at a dead branch. I’ve never tried to identify a woodpecker before so it took a while to narrow it down to Nuttall, but we decided that the spots on the back made it the only option for woodpeckers in this area. I realize that “spots” is probably not a technical term, but I’m unsure of what it would be called so if anyone could inform me of the correct terminology I would appreciate it. We also saw a juvenile Black Phoebe (not the one shown above) which threw us because it had a yellow beak and slightly grayer wings which apparently they grow out of and end up looking like the tuxedoed phoebe we all know and love.

I took my old beat up digital Elph and my dad brought his Canon Rebel with zoom lens. It quickly became apparent that we needed new photography equipment. My point and shoot just didn’t have a good enough zoom to be useful and my dad’s camera was just so bulky for our trip. By the time he got the tripod set up and the camera focused the bird had flown away. I’m not sure how professional bird photographers do it other than just staying in one spot and waiting for the birds to come to them.

So, I’ve been looking into replacing my little camera with something new. I know that I don’t want something bulky and I don’t want to have to change the lens or fiddle a lot with it. I want to be a birder who takes photographs instead of photographer who shoots birds, if that makes sense. I don’t want to spend a ton of money on equipment, I really want something that I can use to take reference photos for my sketches or for bird identification.

After doing a little online research, I narrowed it down to the Canon SX50 and the Nikon P600 since they are essentially the same camera. They both are point and shoot, have insanely long zooms for an attached lens, don’t require other external accessories to work (like a longer lens or tripod), and are light weight. It seems that more birders have the Canon SX50 because it was the first to market and has been out longer. The Nikon P600 is obviously Nikon’s response to the Canon SX50 with each aspect of it being slightly better on paper so it’s competitive. The P600 came out only a few months ago, so it’s the latest in this area. I’m torn because I think both of them will work for what I want and when I went to look at them at Best Buy they seemed to perform the same.

I’m leaning towards the Nikon just because it has 60x zoom compared to the Canon SX50’s 50x. I don’t know if I’ll need the extra 10x, but it’s basically the same price so why not go with the one that’s newer with slightly better numbers? I will make the decision today and probably go ahead and purchase it at Best Buy. I’ll report on my thoughts in a later post after I get to play around with it for a while.

One thought on “Batiquitos Lagoon”

If you want to achieve greatness, stop asking for permission