Birds are messy. They just are. Its been a joy watching the little birds in my backyard hopping around battling for better positioning at my feeders. The problem that I kept running into is that I get so many finches that I would go through an entire medium-sized seed tube feeder a day. At that rate, who can afford the nice no mess pre-shelled seed mixes?

So, I switched to Wild Birds Unlimited‘s Cranberry Seed cylinders to feed my birds. The cylinders are made from normal seed mixes that have been compressed into tubes and held in place with gelatin. The birds have to work at getting each seed pulled out from the rest which is wonderful because 1. they aren’t as likely to grab seed and fly away to eat it 2. they sit in the same place longer so you can get a better view of them 3. they have to vie for position, so they spend more time bickering and less time eating 4. it takes significantly longer for them to eat through the seed.

I was enjoying the cylinders because it resulted in far less mess in my yard since the birds would go through seed slower and that resulted in less shells on the ground.

I still have lots of shells everywhere. Now that our backyard was re-landscaped, the seeds fall into a raised plant bed instead of onto the ground, so it’s harder to clean up. Also because of the time of year, I’m only getting House Finches at the feeders and it would be nice to mix it up a little. So, I’ve been on the hunt for seed alternatives. Here is what I’ve tried: 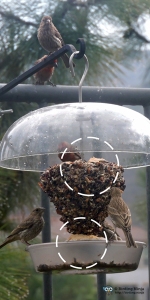 Bark butter is a mix of suet and ground nuts. Since it has suet in it, it’s more calorically dense than seeds and it doesn’t have the mess. You can spread it onto tree bark so essentially it makes any tree a bird feeder. Everyone raves about how easy it is and the diversity of birds it gets. Lots of people make it at home, but since I’m new to it I decided to go with WBU’s Bark Butter on their Bark Butter Feeder (because none of our trees are large enough to use).

For some reason, there were never any adventuresome finches that would find their way to the feeder. So I moved it closer to the seed feeder. Still nothing.

My husband came up with the idea of spreading the bark butter directly onto the seeds, forcing the birds to try it. I tried it out as you can see in the picture. It took a couple of days, but eventually the birds ate it up. 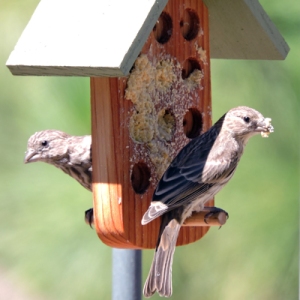 Now that the birds knew it was tasty, they seemed to find the bark butter feeder with no problem. The image to the right shows a little bird chowing down at the feeder.

All you do is spread the bark butter on with the back of a fork onto the feeder and it get into the little circle grooves. The birds then can eat into it without a problem. 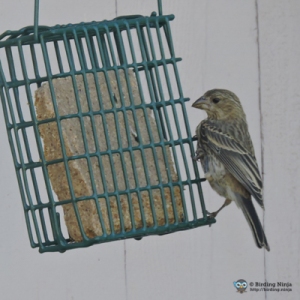 In the past, I’ve done traditional suet feeders too without any success. Since I joined WBU’s membership club, I got a free suet feeder so I thought now would be a good time to try it again. So I placed it on the opposite side of the yard.

The saleswoman said to place it where it was a little hidden so the birds would feel more comfortable trying it. She made it sound like this type of feeder made the birds feel more vulnerable, so they needed vegetation for cover. Vines from our neighbor’s yard were growing over the fence into ours, so I placed it on a hook in the middle of that.

The vines were starting to drive me crazy, so I went ahead and cut them back since it didn’t seem to be helping anyways… lo and behold, they started eating it. I’m not sure what the saleswoman was thinking, perhaps my finches are just more spunky than normal but they liked it better right out in the open.

In a couple of weeks, the suet was gone. 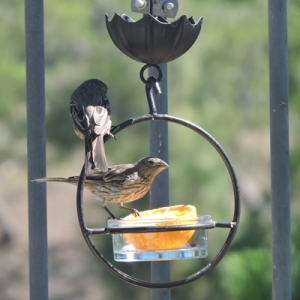 Orioles are currently migrating through San Diego, so I’ve been desperately trying to get some to hang out in my yard. Since they are only here for a couple of months a year I decided instead of investing in an oriole feeder, that I would choose a circle feeder with a little glass cup so I could place fruit and jelly for the orioles and other things in for the rest of the year. I bought it at WBU, but they don’t seem to have it on their website.

So, I tried putting WBU’s grape bird jelly in it. The finches aren’t a fan, but the hummingbirds and bees seem to love it. I stopped putting it out though since I didn’t get any orioles (I didn’t get any with the oranges either). Also some of the bees would get stuck in it. They reminded me of those images of dinosaurs stuck in tar. And it made it feel bad… imagine your last moments spent in sticky delicious goo. Plus, there are enough dead bees in the world. So, I decided to switch to fruit instead.

Since summer means an insane amount of cheap oranges in Southern California, I’ve been putting oranges out sliced in half into the feeder. The birds have been eating it up! The bees seem to also like it, but it hasn’t attracted an insane amount of them or anything. Also, they can’t get trapped in it either so it’s a win-win. I don’t know if fruit will be a viable option all year round, but it’s cheap and plentiful right now. 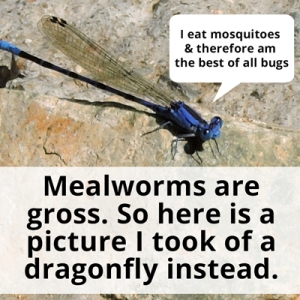 Ok, so I emotionally promised myself every time I saw mealworms in WBU, that I would never buy them. Bugs are gross. Dead they are gross. Alive they are gross. One of the reasons I love birds is that they eat bugs. The only bugs I like are bugs that eat other bugs. And butterflies… because who doesn’t love them?

The last time I was at a WBU store, there was a woman buying live refrigerated mealworms. Apparently, if you keep them in the fridge, they are so cold that they hibernate… or something. Basically, they are frozen, but still alive. They reminded me of lobsters that you get at the grocery store.

Anyways, this woman keeps these mealworms in her fridge.

Right there in the middle of the store. The shock almost killed me. Then I almost died again once the true horror of this set in.

WHO WANTS BUGS IN THEIR FRIDGE?!? I applaud you if you have the stomach to handle this. Maybe it would be the best diet ever because every time you looked in the fridge you would see a box of wiggling worms. Who could eat after that?!? Barf.

My mom somehow thought it would be a great idea to buy some freeze-dried mealworms. I was not there for this decision. I think by now my reaction would have been obvious. But, she got some to try in her yard. It’s been a couple of weeks and no one has taken the bait. So now she has a whole container of mealworms and nothing to do with them.

So… against my better judgement, I’ve decided to try it out. Now, I know what you are thinking (uh, are you forgetting everything you just said?) but I’m getting a little tired of seeing dozens and dozens of little brown finches and I would love to see anything else in my backyard. So, I’m going to give it a shot and see how it goes. I filled up my little circle feeder with worms and so far no takers. I’ll keep you updated with the progress.

If you want to achieve greatness, stop asking for permission